Stoning doesn’t have to be boring. Whether you’re rolling a joint or smoking one, you’ve got everything you need to make this session a one-of-a-kind experience. If only you know exactly what to do. For every joint, you should have a stoned adventure worthy of the name. For many 420 devotees, finding the right adventure trigger can be as simple as watching the weather slowly slip away or watching nature do its thing. Marijuana alone brings a rush of adrenaline and adventure that can sustain you until you finish your stash. But how about upping the game a bit?

Have you thought about pairing your favorite strain with a film that perfectly represents the 420 culture? Combining your smoking experience with the right smoking movie is a thrill you should indulge in. Don’t miss it for anything in the world. Make it a part of you. Make it a hobby. A stoned talent! So, as the 420 family is united, I decided to help you with the movie of my top stoners. All you have to do is get one, play it, and let loose with your favorite strain. Here are my top picks;

Directors: Joel and Ethan Coen
With : Jeff Bridges, John Goodman, Julianne Moore, Steve Buscemi, David Huddleston and John Turturro.
Highlighted conversation: “I’m the Dude. So that’s what you call me. You know, that or, uh, Son Dudeness, or uh, Duder, or El Duderino if you’re not into brevity.”

The Big Lebowski is an easy choice for this job. Not only do the stoning scenes make you smile and learn, but you also easily bond with the characters. At first you think, ‘Oh, that’s bad’, then you flip the coin and you’re like, ‘Holy shit! That’s good!’ So an aging hippie introduces you to an adventurous lifestyle of smoking joints, bowling and drinking white Russians. He does all of this without having a job. His stoning adventure continues until men of hand spoil his abode. The plot is perfect with the right strain. Don’t expect too much sense of plot, just follow the marijuana movie. 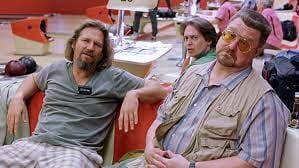 Yes! Ted has set a whole new bar for a smoker movie. You just can’t hate the plot. The story follows a miniature teddy bear, Ted, with realistic characters. Ted’s best friend, John Benet, played by Mark Wahlberg, continually gets messed up by his bear. Ted is the classic stoner who won’t stop until he introduces you to all the popular strains he’s tried. You also get the most hysterical conversation between these two. Ted keeps the screen buzzing, smoking and trying to win a lawsuit over his right as a being. 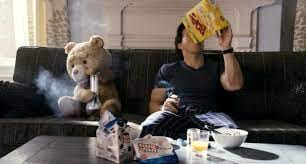 “This is the End” introduces you to a different genre that many stoner movies have yet to try. It quickly changes course, slipping you from one incredible moment to the next. The plot here follows a group of actors who would play “themselves” and present you with a party that would get you in the mood faster. Get ready to meet Rihanna, latex, Emma Watson, alcohol, Craig Robinson, Kush and Kevin Hart. Yes, the confusion is deliberate. Just be prepared to get lost among the marijuana strains and people. This movie gives you an endless stoning adventure. 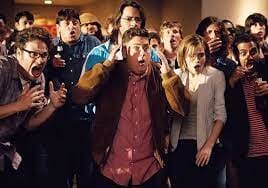 This movie from franchise creators Harold and Kumar might just be the perfect stoner flick you need for Christmas. Why? This film skillfully marries the Yuletide vibe with weed. The weird story will introduce you to Santa Claus himself blessing a guy with a cache of blunt. Imagine how the conversation ended. For many, this film easily passes as one of the best stoner comedies of all time. It plays with your high as you watch, making you choose what’s real between reality itself and hilarious depictions of 3D technology for many scenes. 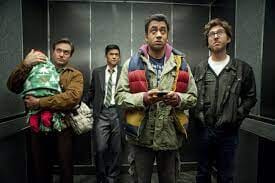 This stoner comedy from 1988 travels back in time to stay relevant every time. The image follows a group of actors who are best described as “weed buddies”. They got in trouble with the law and, at the same time, local drug dealers when they started growing their weed supply. Not only does this selection walk you through the basics of trying to avoid the law while you’re stoned, but you’ll also be able to contribute to the storyline. It sucks you all in, making you wish the writers had explored your stoned suggestions while you watch. Prepare to meet notable members of the marijuana cult, including Snoop Dogg and Tommy Chong. 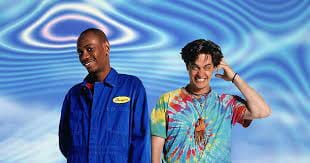 Director: F. Gary Gray
With : Ice Cube, Chris Tucker, Nia Long, Tom Lister Jr., John Witherspoon
Highlighted conversation: “I know you don’t smoke weed, I know that, but I’m going to stone you today, because it’s Friday, you have no work and you have nothing to do.”

Ice Cube and Chris Tucker’s classic act made this film a worthy pick for this list. Friday takes you through the interesting lives of many neighborhood characters and their weed history. The writing is another amazing trick, not focusing too much on one central plot while exploring many characters almost simultaneously. Ice and Chris try to pay their dealer about $200 for a delivery. Struggles to get the job done introduces you to how the hood performs with weed. 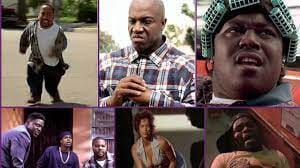 “How high” follows a strange story path, which gives you many adventures. Silas and Jamal, played by Method Man and Redman, smoke marijuana that grows from the remains of their deceased friend, Ivory, played by Check Dezzy. Thus, “Ivory” became a big part of their lives, helping them pass the THC exam and end up at Harvard. While at Harvard, the pair struggled to maintain their grades as their supply of Ivory weed dwindled. So what should a pair of stoned guys do? You certainly couldn’t imagine what happened next. They became desperate and dug up the remains of President John Quincy in an effort to smoke his remains and become smart again. It gives you the right amount of humor and suspense to spice up your weed journey. 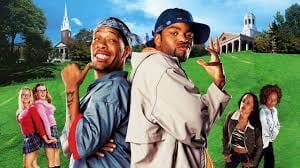 Director: David Gordon Green
With : Seth Rogen, James Franco, Gary Cole, Rosie Perez and Danny McBride
Highlighted conversation: “It’s like that Blue Oyster shit met that Afghan Kush that I had – and they had a baby. And then, meanwhile, that crazy Northern Light thing that I had and the Super Red Espresso Snowflake met and had a baby. And by some miracle, these two babies met and fucked – that would be the shit they had.”

Dale (Seth Roger), a bailiff, and his weed dealer, Saul, get into serious trouble when they witness a murder. Saul’s supplier was the killer, but that quickly changed. Upon leaving the crime scene, Dale and his dealer left a joint of the rare Pineapple Express cannabis strain at the scene of the crime. Things quickly turned sour as they tried to live a normal life after the murder. If you choose this film, you will have a lot to contribute. It brings you suspense, intrigue, and a sharp investigative mindset. 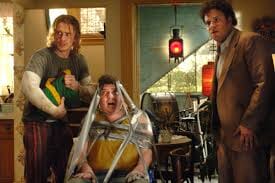 In Up in Smokes, Cheech and Chong (Richard “Cheech” Marin and Tommy Chong) will lead you by the hand on a stoned adventure. These central characters smoked giant blunts and took it a step further by getting high on a joint of Labrador retriever poo! Well, you might not try the poo part, but they give enough of a trigger to get you high on all fronts. The film received mixed reactions as expected, but there’s no denying the fact that it opened up a lot of true marijuana to a world of many possibilities. They’ve had multiple run-ins with the law and got away with it each time. Of course, getting high gives you some magical privileges. The conversations yield multiple laughs that make you wonder why many comedy movies don’t have a weed theme. 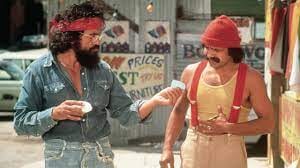 How adept are you at hiding your weed stash while driving down the rural highway? Maybe you need to watch Super Troopers for more ideas. The central theme here follows a trail of passionate highway patrollers who take their jobs seriously. They chase down drug dealers, mess around with stoners, and even get into skirmishes with local cops. Yeah, that was so hilarious. This selection just might serve as a lesson in honing your weed hiding skills. 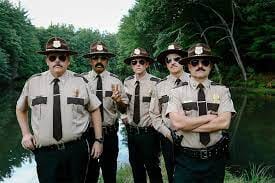 The idea is simple: you shouldn’t get bored while smoking your favorite joint. Getting the right stoner movie on your screen makes it easy to enjoy the marijuana adventure in its fullness. You simply follow your favorite character, try new smoking techniques, or drift away as the weed peacefully pulls you into the action. No matter what you do, don’t get bored smoking this joint!

Warning: This content is intended for educational purposes only. It has been compiled with research from external sources. it is not intended to replace medical or legal advice. Please consult your local laws for the legality of cannabis consumption.

Tags:
movies, stoner
Facebook Twitter Email Pinterest linkedin WhatsApp WhatsApp Telegram
Newer The Different Ways to Consume CBD: A Patient Guide
Back to list
Older To Test or Not to Test: Considerations for Employers Considering the Future of their Cannabis Testing Practices

Facebook Twitter Email Pinterest linkedin WhatsApp WhatsApp Telegram
It's that time of year again when we celebrate our dear old dads. Since it's 2022, you're probably more than a few of you w...

END_OF_DOCUMENT_TOKEN_TO_BE_REPLACED

5 Valentine’s Day Gifts for the Stoner in Your Life

Facebook Twitter Email Pinterest linkedin WhatsApp WhatsApp Telegram
I will start right away and say that this article is secretly a message to my girlfriend who does not smoke. She tells me I'm ...

END_OF_DOCUMENT_TOKEN_TO_BE_REPLACED

Facebook Twitter Email Pinterest linkedin WhatsApp WhatsApp Telegram
Are you always on the go but never want to be without your bud? As a woman with a busy life, I often found myself running out t...