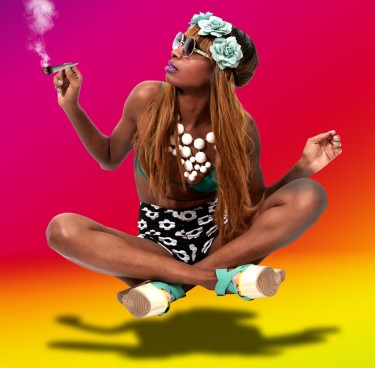 Why Getting High Makes You Happy

A few solid puffs of weed after a working day.

Wake up and cook with your morning coffee to start your day with a smile.

Share a bowl with your friends, then have a fit of laughter together.

These are just a few of the many happy times experienced by stoners and cannabis lovers. It’s undeniable: getting high make you happy. On the surface, recreational users turn to the puff for an instant boost of joy, which many love to share with their buddies. Then, medically speaking, marijuana is used as a serious drug to treat depression and anxiety. It’s happiness in a plant!

So why exactly does it make us so giddy and happy as soon as we feel its effects?

It’s hard to put the psychoactive effects of cannabis into words, but we’ll try anyway.

As soon as you feel buzzed, you feel like you are entering another realm of consciousness where everything is suddenly better. The weather, the world, the people and even the color are different. This altered state tends to make everything lighter and makes it easier to laugh at even the most mundane things. So much so that even the simplest thing can make us laugh out loud – something we wouldn’t if we were sober.

Cannabis is such a relaxing plant. It beats alcohol, hard drugs, and even pills when it comes to gaining the upper hand. No wonder it’s such a popular after-work drug. Instead of happy hours that get you drunk, more and more people are turning to cannabis. Best of all, you won’t have the nasty hangover the next day. It instantly soothes your worries, releases your stress even if it’s just for a few hours, and overall makes you feel great.

Why Cannabis Is Such A Feel-Good Drug

Apparently there’s a science to why it makes us feel so good.

Dr. Raphael Mechoulam, the godfather of cannabis, discovered at the start of his studies of marijuana that a neurotransmitter called anandamide was the reason it makes smokers so happy. Anandamide derives its name from a Sanskrit word, Ananda, which means “happiness”.

In the human brain, anandamide molecules play an important role in our daily life, especially with our emotions, sexual energy, memory, pain and motivation. Additionally, anandamide is an important endocannabinoid, one of the compounds we produce in the body that binds to cannabinoid receptors when we consume cannabis.

“Anandamide inhibits the release of glutamate and acetylcholine in the cortex and hippocampus, an action that may underlie marijuana’s ability to impair a person’s ability to form new memories during use of the drug. The presence of cannabinoid receptors in the parts of the brain that control movement may explain the stumbling behavior that some marijuana users experience. Cannabinoid receptors significantly enhance the release of dopamine; this action plays a vital role in the ability of marijuana to produce euphoria,” writes Dr. Gary Wenk in his book: “Your Brain on Food: How Chemicals Control Your Thoughts and Feelings.”

“Cannabinoid neurons…influence the function of our cortex and various limbic regions (emotion control); when we stimulate these receptors, we impair higher cognitive functions when we experience euphoria, and when they are blocked, we experience depression,” he writes.

What’s interesting is that THC contains high concentrations of anandamide, so while we produce our own anandamide in the body, it also triggers its release when we smoke and consume cannabis. The same receptors are linked to cannabis and anandamide, and when it comes into contact with THC, the production of dopamine is stimulated.

Additionally, anandamide has powerful antidepressant and anti-anxiety properties. Even if you don’t suffer from these mental health issues, a little cannabis makes you much happier than you were before smoking.

Studies also show that once THC reaches the brain, it triggers the release of dopamine, another neurotransmitter well known for its ability to make you feel good. Dopamine is also known as the reward molecule.

It also works the reward system in the brain, which is triggered when we do other things that our bodies inherently know are good for survival or give us pleasure, such as having sex, eating, shopping, shopping, etc. smell of food in the kitchen, and much more.

What’s interesting about studies on dopamine is that they warn against too much and too frequent consumption of cannabis: in other words, consume in moderation, to avoid depleting your brain of serotonin. . This happens because when dopamine levels are high, the brain’s reward system can be triggered, causing you to feel extreme satisfaction and pleasure. Now, if left on for too long, some of the dopamine receptors can be turned off by the body even if you are no longer high from THC. As a result, dopamine synthesis in the human body can be compromised, making it difficult for you to experience pleasure from other things that normally give you joy, such as hobbies, food, and sex.

There’s nothing wrong with suggesting avoiding overeating – in fact, it’s fascinating to learn how the body works. If you are prone to depression and anxiety, you should be wary of how much marijuana you are consuming at this time. it may be better to use microdoses instead of over-lighting a bong if you want to maintain the positive impact of cannabis for your happiness.

The properties of cannabis and how they react with the human body are interesting to discover because they make you happier and euphoric. It’s a natural way to feel upbeat and uplift your mood, while helping the brain get rid of embarrassing reoccurring memories. Remember to avoid consuming cannabis in excess.

LEARN MORE ABOUT ANANDAMIDE, READ THIS… 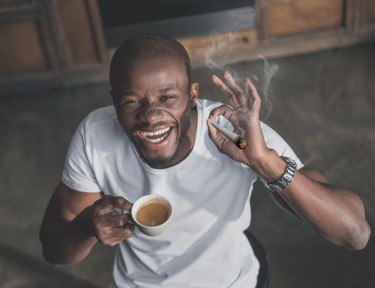 WHAT IS ANANDAMIDE AND WHY DOES IT MAKE US SO HAPPY?

Buying and Selling Cannabis in the Metaverse